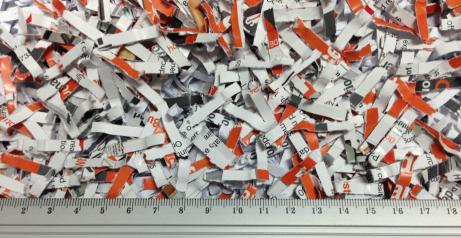 Cross Cut shredders use a method of shredding paper into a narrow shred width and shredded shorter than the original page length.

The crosscut process starts with the paper being pierced by the shredders blades, being held at one point. As the blades rotate into each other and out to the paper exit, the paper shredders blades on the opposite cutter shaft then pierces the paper, holding it at that point until the paper tears to a length, generally determined by the distance between the cross cut blade peaks.

Put simply, rather than the paper being cut (as the name “Cross Cut” suggests), the paper is literally torn, being ripped with the resultant residue being many particles.

Cross Cut paper shredders have several other names such as: 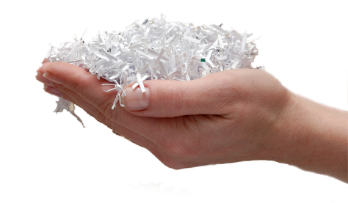 Generally cross cut shredders are required for the purpose of shredding documents and CD/DVD/Blu-ray discs to a higher level security standard. These shredders may be required where documents with a higher level of sensitivity are created by Executives to Innovators creating new technologies protecting trade secrets. Cross cut shredders are often demanded by Government Offices, Financial Institutions, Health Care Sector, Legal Offices and so on. Shredding machines used in the above office environments are usually Security level P4 & P5 document shredders.

An even greater level of security if often required by Defence Forces, High Level Government, Intelligence Agencies, Contractors to the Government and so on. Often these security levels are required due to the nature of Classified Information being handled. The highest security destruction of information is achieved when using these high security shredding machines. These are usually Security level P6 & P7 shredding machines designed for office use.

There is a general consensus in the global market for paper shredders to name various security classifications as follows:

A basic explanation of the “P” measure of document security is:

In the Australian market, for the purposes of shredding classified information generated by government departments, only approved paper shredders can be used, after being tested and authorised to use for the purpose of shredding classified information. There are two security levels that apply to the Australian government with approved paper shredders to be used. The suitable security classification is determined according to the classification of the documents that require shredding. These two security levels are called:

This classified data is generally categorised by the Australian government as Restricted, Confidential, Secret, Top Secret, Protected, Highly Protected. In addition, the creation of classified information is highly regulated with a comprehensive framework to ensure security id maintained such as:

To mention a few.

For more information & free advice on any cross cut shredder or our Infostop paper shredder range, contact a friendly product specialist at Document Dynamix Australia on free call 1800 874 733 or info@documentdynamix.com.au